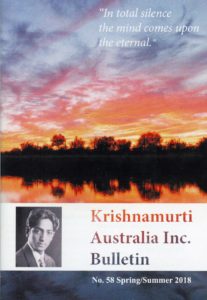 Jiddu Krishnamurti was born in India during the reign of Queen Victoria, when India was regarded as the jewel in the crown of the British Empire. He was discovered by members of the Theosophical Society and groomed to be The World Teacher, in accordance with the belief system of the Theosophists who influenced major social trends in Edwardian England and Imperial India in the first half of the 20th century.

He remains today one of the most mysterious, enigmatic and controversial characters ever to emerge from the river of Masters, gurus, spiritual leaders and philosophers.

He died in Ojai, California in 1986 of pancreatic cancer having left a treasure trove of insights on a par with those of the Buddha.  These insights are referred to as “The Teachings” and represent a priceless perspective of what is possible if human beings will dare to be free from their conditioning.

Various biographers have attempted to record his journey through life. Those sanctioned by Krishnamurti include the three volumes by Mary Lutyens, who was a lifelong friend; and the Memoirs and Unfinished book by his devoted assistant, Mary Zimbalist.

But the best has been left to last.  It is the book, “Krishnamurti: Preparing to Leave” by Scott H. Forbes, who became an intimate of Krishnamurti after he went to work at the Brockwood Park Krishnamurti Educational Centre in 1974.  As the years passed Scott became more enthralled with Krishnamurti’s life and teachings and it was not long before he became an intimate member of the family group which comprised Krishnamurti, Mary Zimbalist, Dr. Parchure and Scott and his wife.

Scott’s book “Krishnamurti: Preparing to Leave” is a priceless account of the last months of Krishnamurti’s life from approximately 25th May 1985 until February 17th, 1986.

During this period, Scott spent six to eight hours a day caring for Krishnaji – as he was affectionately called – and he wrote his account while it was fresh in his mind and before his notes became lost.   He was only thirty seven years of age.   He was the youngest man ever to be so intimately connected with the mature-age World Teacher.

Everything about the book, from the quality of the paper, to the photographs, to the fast-paced descriptions within, strive for excellence.   Biographies, even of famous men, can be boring but not this one.

In an age of visual communication it is an almost insurmountable challenge to make the truth critically relevant and compelling.

Scott H. Forbes succeeds where many before him have failed.  It is Scott’s unpretentious style which is so engaging.  He has an unadulterated love for Krishnaji and this shines through his writing. But, there is no sensationalism in this book, rather a commitment to truthfulness as evidenced in his avoidance of any kind of spiritual mumbo jumbo.  His account is a moving experience to read.  He describes events exactly as they occurred.   He does not attempt to mystify, glorify, or interpret.

Long years ago, Krishnamurti described his relationship with Scott in terms of “cooking him”.  Those who are familiar with Krishnamurti’s entire life, will know that this was a term he coined for “preparing the ground”.   When the time was right, Krishnamurti trusted that Scott would flower and use his talents and energy to help him sow the seeds for generations who would come after.

There are many incidents in Scott’s account which have parallels with the actions of a loving father towards his son, though Scott in no way pursues this line of enquiry.  Scott never avoids a mystery – and there are numerous mysteries surrounding the life and death of Krishnamurti – but he never attempts to explain or intrude with his own interpretation.  He merely tells the story of an incredible man, faced with the seemingly insurmountable task of putting his affairs in order, prior to his earthly departure and in such a way that his lifelong mission of “setting humanity free” would continue until his final breath and more importantly, beyond.   To this end he was confronted with the task of resolving divisions, conflicts and clashes of ego in the organizational structure of his Schools and Foundations in India, England and America.  He worked tirelessly and to the very end to reconcile the disparate forces.

This is not a book of pain and suffering, though these dimensions are certainly present.  Rather it is a tale of endurance, faithfulness, and compassion.

No one interested in Krishnamurti’s life and Teachings should miss reading this book.  It reveals a side of Krishnaji which is arguably missing from other books about him.

To Scott Forbes, Krishnamurti bequeathed the care of Mary Zimbalist who looked after him unselfishly and with complete devotion from 1965 until his death in 1986. He also bequeathed the responsibility of completing the Study Centre at Brockwood Park as he wished it to be.

Scott’s book is important for one final reason.  I believe that it will have great appeal and relevance for young people, who are faced with the conflict and divisions of society in the 21st century.  More than anything else, Scott tells the final chapter of a momentous time in human evolution, when a single human being dared to challenge humanity to be different, to be self aware, and to examine what it means to be truly human.